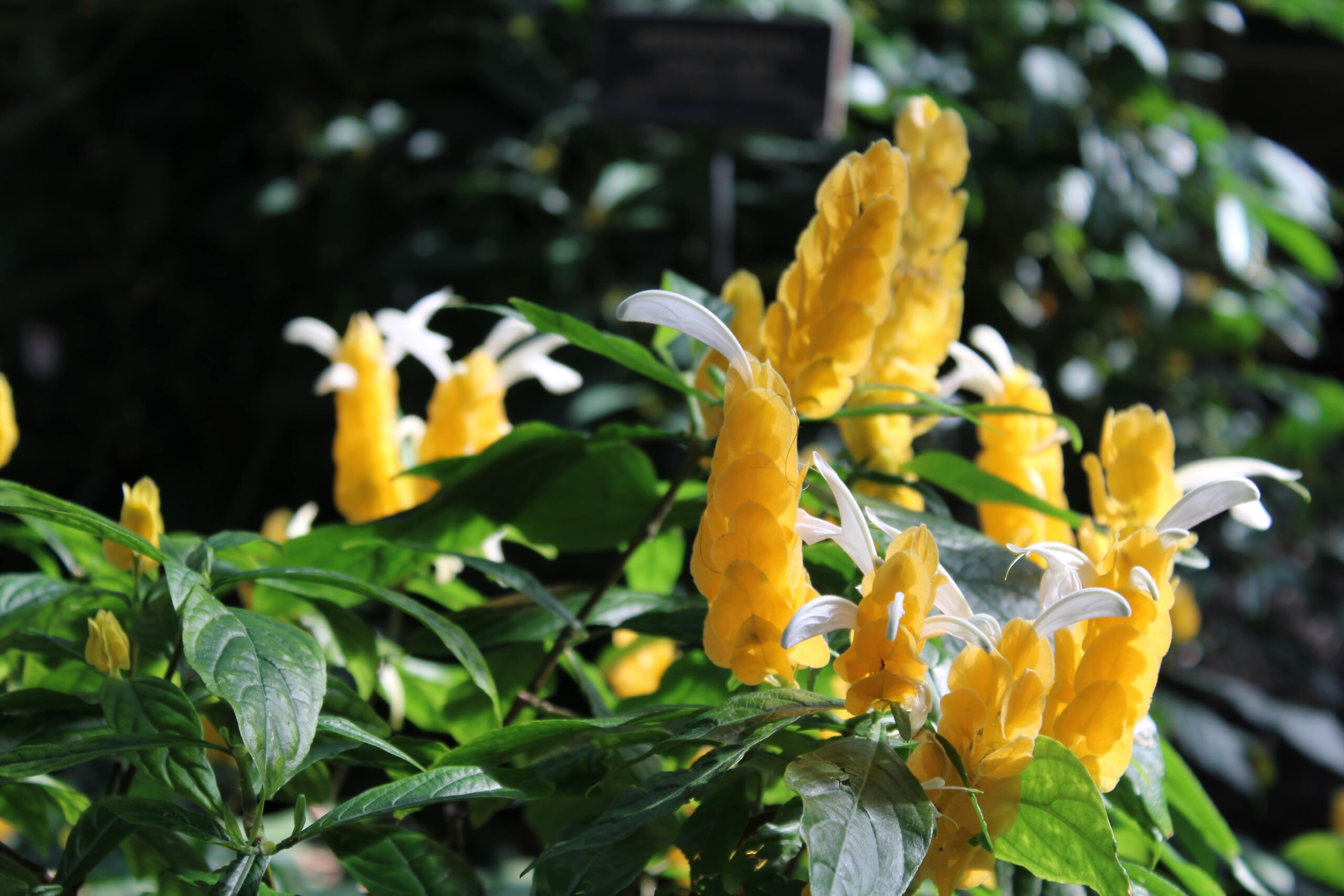 A Paean to Two Plant People of NYC

Ah, plants. The fabric of life. A 2016 report stated that there are roughly 400,000 plants “known to science.” One might assume that this number is bound to trend downward due to the biodiversity loss caused by the unabated burning of fossil fuels by homo sapiens sapiens. It goes without saying that this is existentially terrifying; it not only connotes collective annihilation, but also the loss of being amongst leaves, lying in shaded groves, smelling flowers. There have been studies, all believable, that lay out the salutary health benefits derived from being around plant life. This very author once possessed a potted pilea (named Larry) that stood firm on a windowsill through a bleak Chicago winter, and it was as enlivening a presence as a scrappy mutt.

Living densely in cities is one way to cut those dastardly emissions, but it also often brings truncated green space, at least by the standards of modern urban planning. It’s hard to not feel like entering public parks in urban areas is a sort of whole-body exhale, a detox that is hard to replicate on crammed streets. If you live in New York City, this dynamic is supercharged. It’s a subtly tricky balance: feeling good about reducing your carbon footprint by city living, while also craving a respite from seemingly no contiguous plant life. Yet what if this isn’t destiny for Big Apple fanatics? What if there are people out there, in those vast boroughs, boldly charting new means of being intertwined with plants? In other words, plant people?

As it turns out, there are many such people. For the sake of Occam’s razor, let’s start with one: Jenna Mogilevsky, who runs an enterprise called The Botanical Home. In essence, she’s a plant curator—bringing plants into people’s lives, finding the perfect organizational arrangement for said plants, and then making sure everything is healthy. To hear Jenna tell it, it’s almost as if she has a providential understanding of her role as a plant person: “a lot of people are very disconnected from plants, from nature, especially in New York. So I just found that by offering that service, it really takes a lot of stress off the people.” The beauty of this, of course, is that Jenna is not only positioning herself as an expert on plant positioning; she’s also evangelizing the notion that you can be a plant person. It’s democratic.

“I want people to be connected to plants, and to realize that they have it within themselves to care for them. It’s not that hard,” Jenna clarifies in air quotes. I don’t want to be condescending about that. But it isn’t.” She’s discussing the mental hurdle people often run into when the responsibility of assiduously monitoring a living thing hits them. It’s food for thought. The abundance on offer in public parks is relatively accessible compared to turning your personal space into a hothouse, and yet this may be the best solution for the plant-desperate able to attempt it. If you can’t find plants in asphalt sprawl or a community garden, make the plants come to you! What’s the difference between your space and a botanic garden? Why not be a dilettante horticulturist?

Jenna Mogilevsky in her apartment. Photo by: Lauren Abunassar

Jenna arrived at plant curation through an understandable route: mental health benefits. Originally from Minnesota, her family frequented a cabin in the far north reaches of the Midwest. “I am no stranger to getting my hands dirty,” Jenna notes, reflecting upon childhood afternoons overturning rocks and charting her surroundings. She was in the middle of a rough patch in 2017 when her friend decided to take her to a greenhouse in Wisconsin. It was a “pick-me-up, cheer-up thing…it was December. So it was cold, dark. Just the beginning of the sad season.” Needless to say, such an intervention paid off splendidly. “It was humid and warm and bright and alive. I came home with a handful of plants,” Jenna says. It’s a fitting genesis for a project that essentially recreates this experience for others, helping the down-and-out plantless cross the Rubicon into flora heaven.

If anybody understands the compulsion to make your little world a leafy one, it’s Greg Lastrapes. Greg also had a visceral eureka moment at a plant spot, this time the store East Austin Succulents (now in Manhattan, he hails from Texas). Greg studied ceramic art and engineering at Alfred University in Rochester, after a mentoring potter recommended it. A cursory glance at his work amply demonstrates that he is a master of the form. Yet he found he missed native wildlife during New York winters, and spotting species such as the Argentinian high desert cacti at the succulent shop touched off another artistic calling in him. “I brought back 60 plants to my dorm room, tethering me back to my roots and providing a sense of familiarity in a place that was totally alien to me,” Greg concludes. He now has a greenhouse in his backyard. May we all use self-awareness to such greening ends.

Naturally, Greg melds his plant and ceramic interests together in a way that is conducive to nature’s flourishing. He cites a support structure he crafted that helps a jungle vine to fold back in on itself, its tower shape allowing it “to cascade in a way that it normally would.” Alluding to the trends du jour of other plant people, he further explains that “we as a culture now pull so many things out of the woods, and Borneo, and want to grow them in New York–and they don’t want to grow here. You need to help them along and I have the unique ability to make things.” This doesn’t seem artificial or awkward, as he is literally facilitating aliveness. 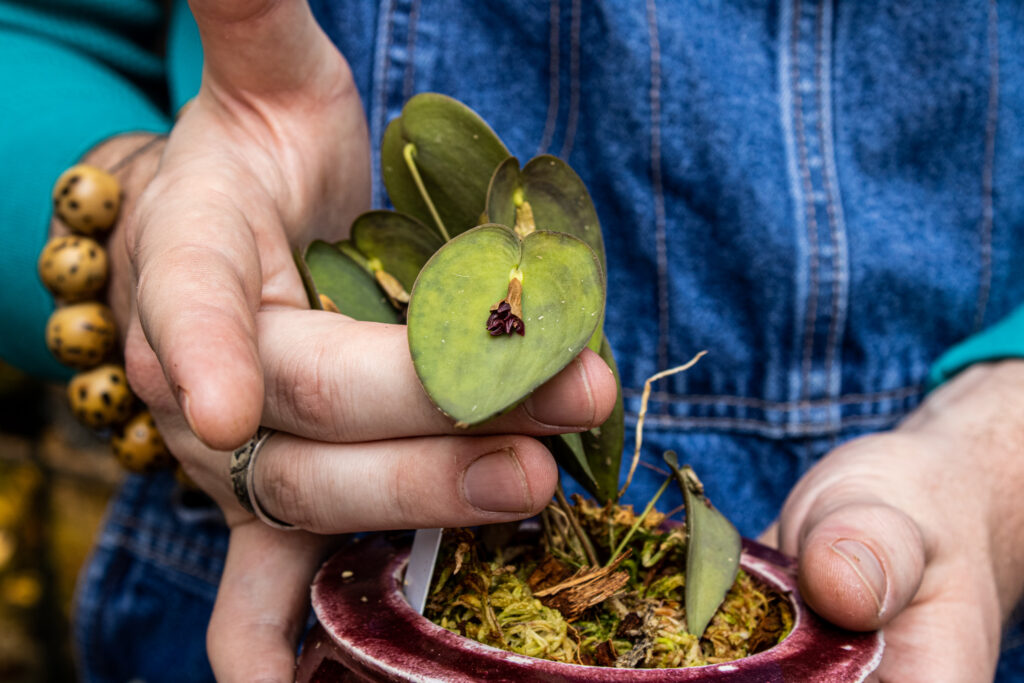 Greg Lastrapes with one of his orchids. Photo by: Lauren Abunassar

Wait a minute. Borneo? Unsurprisingly, the tendrils of the plant world community here in NYC extend internationally, much like a thriving ecosystem. As if describing the most pleasant secret societies you’ve never heard of, Greg talks about his association with The Cactus Store and the Lower East Side Cactus & Succulent Society. Prominent topics include the mist-drinking cacti of the Atacama Desert, located in South America. Domestically, Greg has plant sources in Homestead and Gainesville, both in Florida. They are good sourcing locations because of the weather.

Homestead mirrors the conditions of the Equatorial rainforest, Greg says, meaning that it’s “the warmest year round, and it’s the most humid year round.” He located a nursery there where plants that would be wildly pricey (think $1,000 and up) come free, since the steward is “retired…he wasn’t in it for the money.” Miraculous.  In Gainesville, Greg conversed with plant collectors that possess “a really overgrown orchid,” which he trimmed a bit of for himself, adding conspiratorially that you “walk away with things.” Clearly, the finest plant people have found their interests are incompatible with capitalism, carving out a magnanimous corner of the world where the underlying constant is unadulterated love of vegetation.

Interestingly enough, Greg also challenges the idea that parks offer casual plant escapism for city folk. “I question how big a break these parks actually are from the rest of the city…they’re ringed by frenzy. Sometimes the frenzy creeps in,” he muses. This is a sensation that can be hard to argue with when it comes to, say, Central Park, where Billionaire’s Row looms disruptively over the southern end. More importantly is how parks tend to clash with his plant philosophy (or perhaps plant personality?). As he puts it, it’s the meticulous and planned nature of these spaces. Basically, NYC park designers enjoy “finessing every little detail and mapping it all out and making sure all the angles are cool and whatever.”

A stroll through Prospect Park or the Brooklyn Botanic Gardens all but confirms this, with the neat rows of its cherry esplanade and its carefully delineated greenhouses—tropical rainforest separated from warm temperate, etc. It’s a pedagogical experience. Greg tends to take a more “lush” and unpredictable approach to plant design, where overgrowth allows plants to exist in a sort of undisturbed eden. This is far from a hedonistic pursuit, however, as he explicitly believes in decentering an anthropocentric approach to plant appreciation. Plants were here before us, after all. Greg might take issue with Larry the pilea, as he says naming plants is “trying to impose a human structure on something that isn’t a person.” Fair enough. He has made a notable exception, though: he’s named his beloved and tenacious bottlebrush tree, with its “veins of bright green chlorophyll” and its “pronounced and scraggly” bark, Jeffrey.

Assuming that people like Jenna and Greg come a dime a dozen in NYC is an overgeneralization, of course. Not everybody is going to get down with transforming into a plant person, whether because they don’t want to or because they can’t (can’t afford it, can’t make time, can’t find space). Yet, if you look around at your life and find the perfect confluence of circumstances that allow you to plant plants, to fill pots of plants, to live smothered in plants–by god, do it! You are not alone. There are models and organizations for you to follow in your journey becoming a filament in a wide arc of shrubbery, ferndom, and arboretums. In the process, may you join the tide of those that know to live among others, sustainably, means to live in greenhouses.

Lastrapes in his backyard greenhouse. Photo by: Lauren Abunassar