In 2011, Time magazine named “The Protestor” the person of the year, specifically those who were taking stands against governments in the series of popular uprisings known as the Arab Spring. While they escalated into civil wars and instability across North Africa and much of the Middle East, it became clear that “The Protestor” as an influential character was here to stay.

In 2019, the legacy of that unrest had spread across the globe. Many eyes turned to Hong Kong, where pro-democracy protestors successfully lobbied for a change to the city-state’s laws regarding extradition to mainland China. Mass civil unrest continued for months, as the core of their demands remained unmet. The photos of the protestors show most of them wearing masks, in part to filter out police tear-gas, and in part to mask their identities.

Those protests continued into the early days of the COVID-19 pandemic, 2020, followed by new demands for supplies of medical grade masks. Protestors, including a mix of seasoned ones and those just starting to take to the streets began calling for the closure of the border with mainland China, calling the measures in place insufficient.

While the outcome of the new protests is yet to be seen, the pro-democracy movement has been dealt a blow in the form of several high profile arrests that coincided with declarations by PRC representatives in Hong Kong that the city’s authority derived from them. Social distancing orders combined with fear of the virus prevented the outbreak of the large protests that would most likely have occurred months earlier.

The virus has also further reshaped protests around the world, and not always through their absence. In Israel, 2,000 people gathered while maintaining social distance to call for the resignation of Prime Minister Netanyahu. The Prime Minister had used emergency measures against the virus to maintain power despite indictments for fraud and corruption.

Disputes over what to do with prisoners, refugees, and displaced persons the world over also warranted heated debates and active protests. In the United States, which has one of the world’s largest numbers of incarcerated persons, these protests often took the form of cars bedecked in homemade signs circling prisons and immigrant detention centers for hours on end demanding the release of those held inside. Keeping to cars has allowed the protestors to maintain safe social distance.

However, the novel tactics deployed to argue that the dangers of the virus reaching an incarcerated community have been adopted by groups with very different goals. Caravans protesting stay-at-home orders showed up in many states, even in liberal ones like Connecticut where hundreds  drove through Hartford. However, as illustrated  in a photo by the Cycling Promotion Fund of Canbera, Australia, individuals driving cars take up far more space than they would standing together on the statehouse steps. Videos of dozens of cars belonging to protestors made estimates of actual participation numbers somewhat difficult. 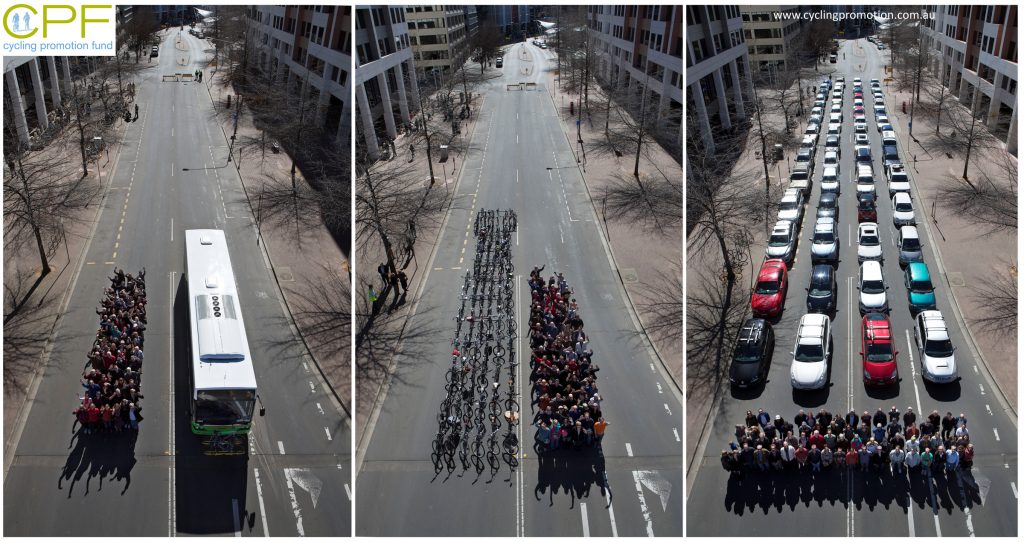 Many of the protests across the US however did not limit themselves to parading their cars past government buildings. A broad group of people who doubted the necessity of stay-at-home orders, the validity of government action, or even the existence of the Coronavirus took their anger directly to the streets throughout April. These groups were largely right wing in both their composition, and tactics, which frequently included brandishing arms.  These protests became a lightning rod for supporters of President Trump, who had encouraged the purchase of a drug which had no effects on the virus, and mused that potentially deadly and unhelpful acts like injecting bleach might be an effective countermeasure.

Most of the population is convinced of the need for social distancing,  according to a Politico poll which showed over 80% of respondents believe the country should remain closed until certain benchmarks have been closed. However, this means that few of these actions drew significant counter-protests, since the majority were convinced that doing so would be unsafe. When counter protests did emerge, they were very often in the form of healthcare workers on the so-called “frontlines” of the pandemic. Backed with scientific evidence if not numbers, these small counter protests produced striking images.

Those same professionals found themselves fighting against their employers, as shortages of protective gear and other equipment led to what they felt were dangerous conditions not just for themselves but their patients. Issues with the American healthcare system have been highlighted by these circumstances, and beleaguered nursing home workers, who have provided care to one of the most susceptible groups of potential patients, are considering strikes.

Strikes have also struck Amazon warehouses and prompted firings of dubious legality. Healthcare workers are not the only people deemed essential and on the frontline, warehouse workers, food processors of all stripes, and grocery employees have remained at work even as stay at home orders were issued. The people who run the logistics that allow the many people working at home or simply self isolating to continue lives of relative comfort are facing risks and protective equipment shortages not dissimilar to healthcare workers. The shortages of essential equipment and heightened tensions in the United States have gotten so dire that over 150 strikes have occurred across the nation.

The economic impacts of the COVID-19 pandemic are also already driving their own wave of protests. Rent strikes have hit landlords across the country, and there are calls for more to come. People in many industries are either out of work, or trying to make ends meet with reduced pay, and federal relief funds have dried up faster than expected in many cases. While some states and municipalities have taken steps to freeze mortgages and rents, the issues involved persist even with moratoriums on evictions in most major cities. The longstanding homelessness crisis has also come to a head with the unhoused simply occupying empty homes in high-rent areas like San-Francisco.

Many protests are largely about issues that existed before the pandemic, or are the result of underlying issues that the pandemic exacerbated. With effective treatment still unclear, and tempers flaring about efforts to reopen the United States as well as other countries, it seems like the impact of protest under the pandemic will reach far beyond the aftermath of the virus itself. With ever widening class division and deepening senses of distrust and alienation, it may very well be that COVID-19’s legacy will have less to do with the disease itself and more to do with how society reshapes itself in response.